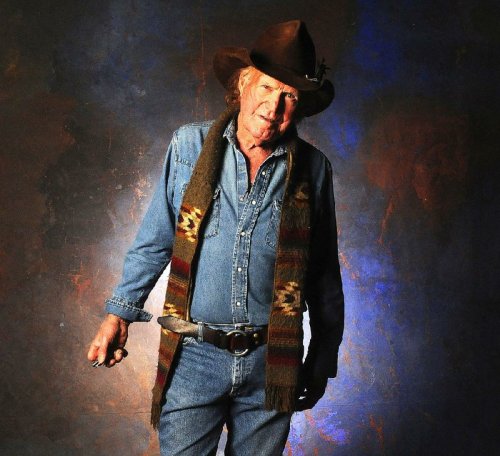 Billy Joe Shaver’s highest charting record is Long in the Tooth, his Lightning Rod debut released last year just before the outlaw country singer’s 75th birthday. But the country singer-songwriter is no stranger to a hit. “Live Forever” may have been his biggest, but he’s been recording for more than 40 years.
Shaver’s outlaw country label was arguably never more appropriate than it was in 2007, when he shot a man outside a Lorena, Texas tavern.

The incident, which Shaver later told NPR was because the man he shot was “such a bully” and for which Shaver was later acquitted on the grounds of self-defense, became the subject of the Dale Watson-penned song “Where Do You Want It?” The title of that song references words that witnesses claimed to have heard Shaver say shortly before the shooting – though Shaver denies having said them.

Before his April 22 show at WorkPlay, Shaver spoke to Weld about that infamous night in Lorena and about other wild nights he’s had with his friend Willie Nelson. He shared what he’s learned about life and how to live it.

Do you think that Dale Watson’s “Where Do You Want It?” is a fair account of what actually happened that night?

I didn’t say [those words]. Dale called me the very night that it happened. It was early in the morning. He said, “Do you care if I write that song?”

And I said, “I guess it’s alright.” I know Dale real well, and he’s a great writer, really. And singer, too.

I said, “Yeah, I guess so. Somebody’s going to write it.”

And he said, “Well, I already wrote it.”

And he said, “I’m going to tell you the title.”

I hadn’t turned myself in yet, really. You get 72 hours, and then they’ll come looking for you. I came in the next morning and everyone up there was dressed to the nines — the women were, anyway. They all pointed at me and said, “You said ‘Where do you want it?’”

And, of course, it went from there. He like to got me put in the penitentiary is what he done. All during the trial, they used that against me. I tried to tell them I didn’t say it, but they wouldn’t listen to me.

I wound up having to write “Wacko from Waco” to see if that would kind of counter it. They’re both good songs. But he had done rung that bell.

Are you okay with Dale now? Have y’all straightened it out?

Oh yeah! We’ve always been friends. And we always will be. I didn’t mind him writing that. He thought that’s what I said. Or he made it up one, I don’t know which. It worked out alright for him. People would call me up and play that song, “Listen to your hit!”

I’d say, “It ain’t my hit!” [Laughs] I didn’t write it. I didn’t sing it, either. All during that time — they finally indicted me after maybe five years. Maybe it wasn’t that long, I don’t know. It seemed like it. I had God on my side… And I was acquitted. And that’s probably all that I ought to say about that thing because I don’t want to open that can of worms again.

What is the wildest night that you’ve ever shared with Willie [Nelson]?

[Laughs] There’s so many of them, I don’t know. We played at a place called 57 Doors [former Dallas club] and we did a lot of kicking around back then. There were a bunch of rich people there that didn’t know anything about the “wacky tobaccy,” you know? They were all sitting around a circle passing this thing and this one — [the joint] finally got down to real small, and somebody put one of those things you use to clamp veins with on it. They’re passing it around and there’s this real rich lady sitting next to me and she’s real cute, maybe around mid-30s.

I said, “You stick it up your nose and twist it.”

And I had to stop her! She was fixing to stick it up her nose and twist it. That one was kind of wild. I could tell you some more, but they’re all X-rated.

What is right about country music today?

My album is right. It’s real good. And there’s a lot of other players that are real good. And there’s a lot of them that are experimenting, I’d say, going out on a limb and trying new things. I don’t know — maybe they’ll make it and maybe they won’t. I don’t know. But I feel like they’ll come down — it’ll come back down where it was supposed to be. Somewhere around the level it was in the 70s.

What’s wrong with it?

I can’t say exactly what’s wrong with it. They don’t tell as interesting or down-home stories as they used to. And it seems like it’s for college kids instead of common folk.

The new record, Long in the Tooth, is the highest charting record of your career. Is it especially satisfying to achieve that now?

That’s real good. And I expected that. I expected to hang around forever and then go on. And I expected to make other records, and now I’m going to have to make one better than the last one. That’s the way I always feel. The record that really gets overlooked is Tramp on Your Street. We did that back in, well, ’89. But it didn’t get out until the 90s —’91 or something like that.

You’ve hit the road hard for a long time. Have you gotten tired of it yet?

No, I haven’t. I love it. I love the road. It gets in your blood, man. Ask anybody — Haggard, Willie — any of them, and they’ll tell you. It just gets in your blood and you don’t feel good unless you’re doing that. But they both complement each other. Right now, I’m kind of licking my wounds and trying to get my body straightened out. The time that you’re home, you appreciate because you’ve been out on the road, and the time you’re on the road, you really appreciate because you’re tired of home. You meet so many new and interesting people.

Over the last few records, you’ve collaborated a lot with your peers. What younger artist would you like to collaborate with today if you were able?

Jackson Taylor. And my guitar player, Jeremy Woodall. He and I are on to some really great song that we’re fixing to let out. One of the biggest songs, we haven’t even touched. It’s going to be a really good one. I never did like to write with other people before. I’d write with them and then I’d just finish it and give them half, but now that I’ve run into some people like Gary Nicholson and Ray Kennedy and people that really know how to write, I’m doing real good. I like that. It’s like lifting weights or something. If you have a spotter, you’ll do it, but otherwise, you might just hang around the house and not go lift weights [Laughs].

Mortality has always been a theme that you’ve returned to in your writing. What is the most important thing that you’ve learned about people in 75 years?

In 75 years? Always trust everybody. Don’t judge anybody by how you’ve been treated. You might break somebody’s heart. There are a bunch of honest people out there.

Who are the top five American artists of all time?

Billy Joe Shaver comes to the Workplay Theatre on Wednesday, April 22. Jackson Capps will open. Doors open at 6:30 p.m. and the performance begins at 8 p.m. Tickets are $22. For more information, visit workplay.com.