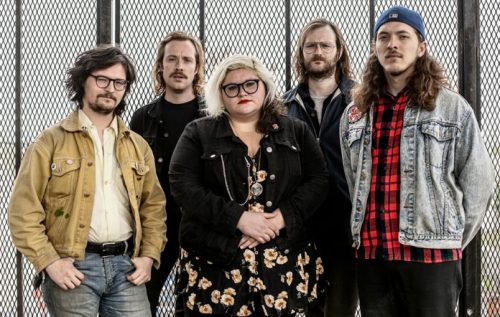 Sheer Mag is a rock and roll band that calls Philadelphia home. They’re a little bit punk; they’re a little bit glam. The five-piece released their first full-length studio album Need to Feel Your Love this year to critical acclaim. In 2015, Rolling Stone included the band among “10 New Artists You Need to Know,” and this weekend, you’ll have an opportunity to get to know them for free.Matt Palmer is the rhythm guitarist and keyboardist. He talked about what the band is, the artists that they chose to cover as a “wedding band” earlier this year and the band’s adopted hometown of Philadelphia.

I guess the easiest thing to call what you guys do is “garage rock.” Who do you credit this current revival of that sound to?

I wouldn’t call us “garage rock,” but I do see that revival happening everywhere. I probably listen to more garage rock than anyone else in the band, and it was probably find the Black Lips on the Nuggets compilation like 15 years ago. It is a global phenomenon how everyone love garage rock right now. When we’re in Europe, we play with so many garage rock bands, and everyone is playing the compilation of garage rock stuff from the late 60’s and early 70’s. The Black Lips really made that popular ten years ago or so, and since then, there have been so many bands that have come in their wake. It’s a very democratic medium. It’s like that old cliche about punk rock: you really just need to know three chords and if you play with energy, it’s probably going to be entertaining.

When I started playing music ten years ago, that’s what I was interested in. I started trying to learn Black Lips songs because I wasn’t very good at guitar and those songs are not hard at all to play. It’s an easily accessible introduction point for musicians because it’s so easy to play.

Earlier this year, you guys played a wedding. How did that come about and what was the first dance?

The bride and groom are really good friends of ours. They’ve always booked our shows in Greensboro, North Carolina. They initially asked if we just wanted to play a show; they’re punks and they wanted to have a show at their wedding. So we got into the idea of doing a “wedding band” set where we did all covers, and we’d play after the ceremony. The first song was “Another Girl, Another World” by The Only Ones. And the father/daughter dance was “Yer So Bad” by Tom Petty.

What was the scene like where you guys met at SUNY – Purchase?

It was a pretty fertile breeding ground for musicians. There were a lot of bands that came out of there that are fairly popular now. The scene then was a lot of indie and math rock was really popular. A lot of people were into post-emo-screamo math rock [expletive]. Whatever Level Up is. Titus Andronicus influenced a lot – like a lot of bands came out of there that are doing well now. Level Up. Porches. Mitski. It was cool. That’s where I cut my teeth as a songwriter. That was the first time that I went on tour with a lot of the people that are in Sheer Mag now. That’s sort of the place that we started getting really good at writing songs and getting used to playing shows every weekend.

Why did you guys decide to relocate to Philadelphia?

Christina [Halladay, lead singer] is a little older, so she had already moved. We all basically came for the same reason. New York is too expensive. The college we went to was 45 minutes north of New York City, so pretty much everyone I went to college with lived in New York. It was never gonna work in New York. I can’t afford to live there. You have to work two jobs to make rent and I barely have to work at all here. I live like a king in Philadelphia.

It is much less expensive. I’ve often wondered why everyone up there hasn’t run to Philadelphia…

I think they’re starting to – it’s only a matter of time until everyone figures that out. I think the largest population in New York are 20-somethings. People are starting to get out.

What is the greatest Philadelphia band of all time?

Sheer Mag: A Saturn Nights Showcase is at Saturn on Sunday, October 15. Shocks and Dommel Mosel open. Doors are at 7 p.m. Show is at 8 p.m. Admission is free thanks to Good People Brewing Company.