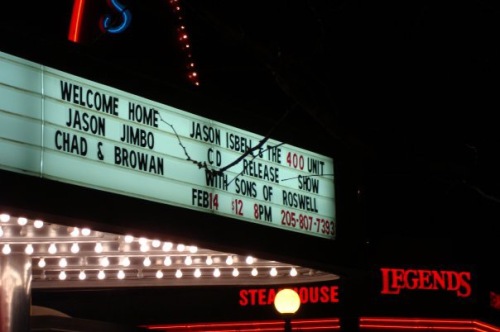 When it started, Isbell and the band, for the most part, were just folks that grew up 20 or 30 minutes away from where I grew up and they were touring hard—200-250 shows a year. They weren’t afraid to play every club and theater in every city in Alabama (they played the Moulton Chicken and Egg Festival just before Southeastern was released, not to mention the dive bars they were playing five years prior) and as Birmingham really isn’t much more than two hours from most anywhere within the state’s walls, those first 40 or so shows collected pretty quickly.

The first one was an opening set for Will Hoge at Birmingham’s Workplay Theatre in 2007. I think it may have technically been a “co-headline,” now that I look it up 12 years on.

I went to the first show at The Ryman in August of 2013, and at that time, it kind of felt like that was the peak. I had been to plenty of shows at The Ryman before, but that felt like the point that this hobby had taken me as far as it could.

Things really changed when Drive-By Truckers opened for Alabama Shakes at Red Rocks in 2015. I was watching the live stream with my then girlfriend, and I told her, “I’ve got to go to Red Rocks. I guess it’ll be the next time Isbell plays there, but somehow, someday, I have to make it happen.”

That November, he played a club in Denver and announced via Twitter: “We’ll see y’all next year at Red Rocks.”

So I bought the tickets and figured it out later. That’s kind of been the MO. I’ve seen them there twice, now.

I’ve seen them 99 times in 21 states. This evening will be the 100th in 21 states—the tenth city in the state of Alabama.

Those Alabama cities are:

At some point along the way, it became about more than a rock and roll show—it became a way to push me out of Alabama and into parts of America that I’d have otherwise never seen. All of this was percolating during a time when it became more difficult for Americans to talk to each other.

Just this month, I spent a day hanging out with Don and his wife and family in St. Charles, Iowa. Don retired at 55 so that he could spend more time with his son with special needs. They now have a lawn service together and Don took a really amazing photo of a buffalo once. He assured me that I need to swing through Eureka Springs when I visit Fayetteville, Arkansas, and he bought me a White Claw.

One hot summer day in 2017, I watched the Mets play at Citi Field with Robert from Bayside. I picked up a last minute ticket on Stubhub and it was his extra. Robert was 62 at the time, and he was five years away from his pension. His daughter was about to go to college. She wanted to go into advertising.

I saw Acadia National Park in Maine and Glacier National Park in Montana. I saw Crater Lake National Park in Oregon and I saw the Channel Islands off of the California coast. I saw the White House (again). I saw five Broadway shows. I saw a game at Wrigley Field and Dodger Stadium; at Camden Yards, Coors Field and at Nationals Park. I saw Fort McHenry and the Lincoln Memorial and the actual Field of Dreams. I walked Bourbon Street and Santa Monica Boulevard and 5th Avenue. I gawked at the bright lights of Times Square. I saw the last Blockbuster Video store in America, and I spent late nights at the Continental Club and C-Boys Heart and Soul on South Congress.

I ate sweet corn and cheese curds in Iowa and I ate tacos in Austin. I had a lobster roll in Maine and a slice of pizza that melted into a paper plate in New York City. I ate crab cakes in Baltimore and hot dogs in Chicago. I had a hot brown from the Brown Hotel and a two piece from the original Kentucky Fried Chicken. I went to this Italian place in Baltimore where the menu was just filled with shapes of pastas and sauces and I picked two and this sweet older Italian lady says, “You picked a good one,” with an approving wink. I went to an honest to god speakeasy in Maine where I had to pull a bookcase from a wall to find the door. I tried burgers and bbq (pork and brisket) in every corner of these United States and found out that the best one is still the one that you liked when you were in approximately ninth grade. I saw 90s “one hit wonders” Stroke 9 play at an ice skating rink in rural Pennsylvania and I saw Carnegie Hall. I drove though the Cumberland Gap on the way to seeing “Cumberland Gap” performed for the first time live.

All pretty wild from a kid that was raised in Rogersville, Alabama, I assure you. People in my current hometown of Birmingham are baffled when I insist that “Birmingham” was a fantasy where I grew up; an escape from the rural South. Over the past several years, knowing that I could escape that already greater escape to places across America that locals find ordinary and see things I never believed, and at the end of the day, take comfort in 100 minutes of familiar music from some folks that grew up the same way that I did (for the most part) made it all a little less frightening to tackle alone.

Here is a list of the dumbest drives I made to see Isbell shows (taken from my Twitter feed a year or so ago):

2. All six Ryman shows in 2017; only sleeping in Nashville two nights.

4. Louisville to Asheville to Birmingham.

(I’d probably also add that drive to Indianapolis. That one wasn’t fun.)

I don’t particularly have a ranking of the best shows I’ve seen. That’s always a quick question when this topic comes up. I know that Bend, Oregon this summer would be pretty high on the list. I’ll say the best venues were as follows:

I dragged my feet a little getting to 100, if I’m being honest. I could have gone to Oxford; could have knocked off a new state and driven to Omaha after the set at Hinterland. But somehow, 100 landed one day before my birthday, at my Alma Mater and it will be the first time that the woman I think I’ll probably try to convince to stick around has ever seen the band—also at her Alma Mater. All of that was kind of a little too special to ruin with a lonely two hour drive across the Midwest on a Sunday in early August.

I don’t know what happens next. There are certainly dates on my calendar in the coming months—I’ll visit Arkansas for my 22nd state next week. I’ll see a couple of shows during the Ryman run. I’ll be covering Mile 0 Fest in Key West. There have been times when it was all that could keep me sane. I’m grateful for the experience, and I encourage you to find your own something to love.