This may have been the most difficult year that I have ever tried to rank my ten favorite albums. There wasn’t a record really–other than perhaps my favorite–that was superior to everything else recorded this year, but there were 100 that were great. I could have easily stretched this into something much longer, but I think I’ve kept at this concise list for a decade or so and there’s no reason to deviate now. It was a great year for pop music, and I didn’t even include the shockingly fabulous Harry Styles debut.

10 (b). Mount Eerie – A Crow Looked at Me. Although I will make an exception and cheat a bit. I’m going to split 10th place, because two records–which had nothing to do with each other–reflected a roller coaster of emotions that I think we all shared at some point this year. This one was written by Phil Elverum entirely about losing his wife to pancreatic cancer. He wrote it in the room she died, he used her instruments to record it and it is the most painful record I have heard since Vic Chestnutt’s final album. In the way that I believe 12 Years a Slave is simultaneously one of the most brilliant movies ever made and I don’t really need to see it again, A Crow Looked at Me is stunning.

10 (a). Paramore – After Laughter. This is a big, dumb, fun pop record. It barely qualifies as anything “punk” at this point, which is the genre where Hayley Williams and company cut their teeth. But the world needed big, dumb and fun from music in 2017 as much as it needed protest songs. And this isn’t the last record that qualifies as such on my list. This record gently whispers in your ear, “Hey, it’s 76 degrees out and we are going to drive to the beach for a week.”

9. Tyler Childers – Purgatory. I’ve certainly thrown myself into everything Americana over the past few years; or “Southern Indie” if you hate labels, man.

I was visiting some friends in Louisville in June and one introduced me to this Kentucky product, a few months before this full length debut had been released. I was floored. You can argue that maybe this was a bit overproduced, and my friend did just that. But the songwriting feels like Kentucky in the way that Jason Isbell’s songwriting feels like Alabama. He has one of the most unique voices I’ve heard arrive in quite some time. And he has limitless potential if he can stay focused on moving forward.

8. Samphia – Process. I wore this record out during the first quarter of this year. “Blood on Me” is the best track, but everything feels like a slow build to the line in “Reverse Faults” — “took the brake pads out the car.” And when that drop hits, it’s one of the best things that happened on any record this year. The first time you hear it, it feels like the first time you hear “Suit and Tie” by Justin Timberlake kick in.

7. Bully – Losing. Bully is “from Nashville,” but Alicia Bognanno is from Minnesota. The band is at the forefront of a group of Nashville rock bands that met at local colleges that are loaded with great music business curriculum. It’s an angst-filled punk rock record that first reminded me of Sleater-Kinney, but Bognanno told me before the band’s Birmingham show that she was much more influenced by Kim Deal and The Breeders. In college, she interned for Steve Albini, who worked with The Breeders, Nirvana, The Jesus Lizard, The Pixies, Superchunk, Jawbreaker and many others, and she engineered Losing herself.

Now, if you take all of the bands and words I have used here and imagine what it would sound like–it sounds exactly like that.

6. Ke$ha – Rainbow. I’m not sure that I knew you could make a deeply personal pop record, but Ke$ha did it and had what was clearly this year’s greatest comeback story. It was a great year for pop.

5. Taylor Swift – reputation. Rob Sheffield from Rolling Stone pinned down exactly what this record is, and how you need to hear it if you want to hear what Taylor was trying to capture.

“…a song cycle about how it feels when you stop chasing romance and start letting your life happen.”

When you hear this record that way, it all makes sense. From the over the top singles that people thought were a bit much, to the absolutely flawless finale, “New Year’s Day.” And even when you hear the spoken word, “Sorry, the old Taylor can’t come to the phone right now. Why? Cause she’d dead.” it makes complete sense in the context of this being a 15-track odyssey about fully evolving and becoming comfortable in your own skin for the first time.

The thing about Taylor Swift–especially over the course of the last two records–is that she creates things that you haven’t heard before. And when you hear something that isn’t familiar, it can be jarring. Maybe you never even come back; but you always should. I think Jason Isbell and the 400 Unit similarly accomplished this on this year’s brilliant The Nashville Sound. It didn’t sound like anything he had done, really, which made it a record that became better with each listen. In each case, they are songs that age gracefully despite your immediate unfamiliarity. And that’s why each of those respective artists are the bellwether of their respective genres; often imitated, rarely duplicated.

4. Nikki Lane – Highway Queen. I don’t know why, but all year as I tried to rattle off my favorite records released this year, this is one of the top two I always thought about. I guess I simply love Nikki Lane’s whole…”deal.” I love the western thing. I love the songs, and I love her story. I love that she married and divorced a little young, left the South to discover herself and returned to Nashville to realize that it was mostly who she always was, but with a little better understanding of life beyond the walls she grew up inside. I love seeing her live show.

And I guess all of that could be more concisely summed up as: I love Nikki Lane’s authenticity.

3. David Rawlings – Poor David’s Almanack. There are songs on this record–especially “Airplane”–that feel like you have known them for years. Another fabulous record this year–Contraband Love by Larry Campbell and Teresa Williams–had some tracks with that same quality (if you’re interested in looking that one up, check out “When I Stop Loving You”). 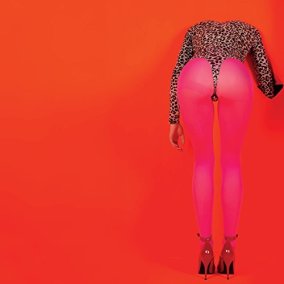 2. St. Vincent – Masseduction. Annie Clark made a really great pop record this year, too. And that isn’t necessarily her thing, but I feel like she made the St. Vincent dance record that we needed in 2017, not the oddities we’ve marveled at in the past.

1. Perfume Genius – No Shape. Simply striking. In the way that I said that Sampha’s “Reverse Faults” (and Justin Timberlake’s “Suit and Tie”) have a way of grabbing you, this record’s opening track, “Otherside” is one of the most beautiful things I have ever heard. It didn’t seem so at the Birmingham show at Saturn, but at the Atlanta show at Terminal West earlier this year, the volume was…loud. The kind of loud that rattles your insides; and when that bass hit, it forced chills down my spine whether I felt them on my own or not.

No Shape doesn’t have a catchy hook. It’s art.