I saw one show this year that caught me completely off guard, another show that I am redacting every detail about and a band of punk rock heroes. I saw intimate living room style shows and I went to Red Rocks. I even managed to see Jason Isbell & the 400 Unit a time or two (Red Rocks, the Greek Theater in Los Angeles, Chicago, Brooklyn, Providence, Indianapolis, Nashville, Portland, down the street).

10. Marie/Lepanto. Standard Deluxe. Waverly, Ala. 4.24.18. The collaborative effort between Justin Peter Kinkel-Schuster of Water Liars and Will Johnson of Centromatic was one of my favorite things that happened this year. The record just missed my top ten of the year. This performance, in the Little House at Standard Deluxe, was perfect. So were several other shows that I caught at Scott Peek’s slice of Americana heaven in Waverly, Alabama – shows like the John Paul White show on March 23 and the American Aquarium full band show later in the year. The room holds roughly 50 people. It’s special. And every artist that comes through knows it. John Paul White and American Aquarium – for instance – could have moved their performances outside and sold more tickets, but they opted instead to play two shows.

9. The Descendents. Marathon Music Works. Nashville, Tenn. 5.25.18. This was exactly what it will be like when I get old. The day before U2’s performance at Bridgestone, I noticed The Descendents playing Marathon and it was something that had to be arranged. I think they played 45 songs that lasted a minute and a half. They look exactly like our dads now, and they are still punk af.

8. Brandi Carlile with Jason Isbell & the 400 Unit. Thompson’s Point. Portland, Maine. 7.21.18. Not sure what needs to be said about this one other than what it was. It was chilly enough to wear a hoodie. I was surrounded by folks I love. Wonderful evening in the northeast.

7. Pistol Annies. Ryman Auditorium. Nashville, Tenn. 10.25.18. On the day off in the middle of Jason Isbell & the 400 Unit’s Ryman run, Pistol Annies played their first show together in over five years. It was a hard sellout, and one intoxicated lady on the front row decided to lean onto the stage and belt out the lyrics. Miranda Lambert stopped the entire performance, warning her, “No ma’am. This is my night.” Lambert then took the woman by the hand and guided her to security at the end of stage right. I have never seen a bigger celebrity on a more gazed upon stage recall their days of playing in dive bars and dance halls so sharply. 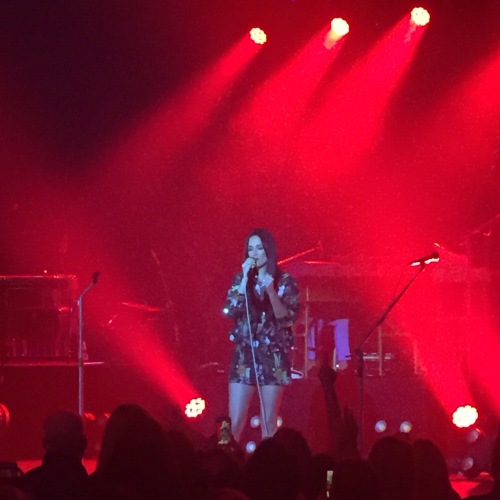 5. Kacey Musgraves with Joshua Hedley. Billy Reid Shindig. Shoals Theatre. Florence, Ala. 8.25.18. Kacey brought exactly what Kacey does to little ol’ Florence, Ala. That is, she made “Neon Moon” by Brooks & Dunn a gay club song, and she didn’t apologize for anything about what makes her Kacey Musgraves. It’s amazing that that standard of hers finally won her critical acclaim, and it’s amazing that it was welcomed with open arms in little ol’ Florence, Ala. We haven’t gotten all the way there, yet, 2018. But we’re way, way closer.

4. David Byrne. BJCC Concert Hall. 10.3.18. This was actually the second David Byrne performance I saw this year, but this was the full show. The real deal. A choreographed, rehearsed, perfect masterpiece that is fit for Broadway. And on this occasion, I was able to interview David Byrne – truly a highlight of my life that will be hard to match.

3. David Rawlings. Lyric Theatre. Birmingham, Ala. 1.24.18. David Rawlings and most of the machine – or at least significant parts of the machine – did what David Rawlings does in my favorite room in Birmingham back in January. And I specifically remember saying then, “There are more than 11 months left in this year, and that one is going to be hard to top. In what seems like a decade ago now, I also talked to David. I asked him about the argument concerning Morrissey.

2. Phish. Dick’s Sporting Goods Arena. Denver, Col. 9.2.18. I will write about my experience at a Phish show in Denver one day. That day is not today. I’ve never been a Phish fan, necessarily, but after this show, I get it. Never miss a Sunday show.

1. Keith Urban. Bridgestone Arena. Nashville, Tenn. 8.24.18. I have also never necessarily been a Keith Urban fan. But this changed that. Urban played for nearly three hours, bringing out his opener, Kelsea Ballerini (who made huge waves of her own this year behind a collaboration with The Chainsmokers that was arguably the Song of the Summer), Carrie Underwood, his wife, Nicole Kidman, Reese Witherspoon, Larkin Poe, Kassi Ashton and the Tennessee State Marching Band (above). He went into the crowd with the same type of abandon as Bruce Springsteen, and he worked the audience the same, with simultaneous cheese and generosity that turns an arena show into a magic experience. He called two girls on stage and introduced them to his celebrity wife and her celebrity friend.

It was nothing short of spectacular. I was on the floor. I had no expectation of this blowing me away, and it may have been the second best concert I have ever seen in my life. And it was on my birthday. Big fun night in the Music City.