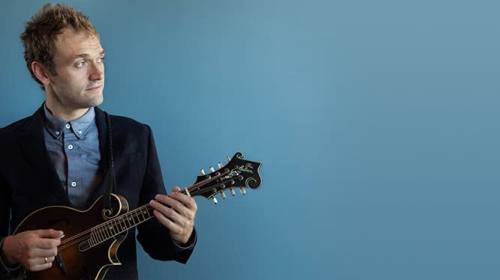 Chris Thile is a busy man. In 2012 he became a MacArthur Fellow. In 2014 he rejoined Sara and Sean Watkins for a tour and album with their groundbreaking trio Nickel Creek. In 2015 he recorded “The Phosphorescent Blues” with Punch Brothers, a record the band is still touring behind. He’s recorded with Yo Yo Ma and he’s working on a new project with Bela Fleck. And in 2016 it was announced that he will succeed Garrison Keillor as host of NPR’s A Prairie Home Companion.

Through his bands, collaborations and solo projects, he has released some 25 albums. He’s won four Grammy Awards. And the mandolin virtuoso just turned 35.
Punch Brothers, whose upcoming performance at Iron City brings Thile back to Birmingham, formed in 2006 through what Thile has described as shared commiseration of failed relationships between he and his bandmates Gabe Witcher, Noam Pikelny, Chris Eldridge and Paul Kowert. But now there are wives and kids. The band’s foundation has been rocked by happiness.

“Great collaborations have a way of evolving with life,” he said. “Punch Brothers is certainly that for me. I think all four of my bandmates would say the same thing. Punch Brothers seems to speak to us regardless of where we are in our individual lives. The Phosphorescent Blues was the first record that I had written lyrics for from a happy place. At least happy in love — I’m by nature a fairly happy person, but I haven’t always been lucky in love. After I met my wife, Claire [Coffee], and we got engaged and got married, I was a little nervous [laughs].

“You hear happy love songs and often they come across a little trite. Or just uninteresting. Or, you know, ‘Good for you man!’ So Phosphorescent Blues was the first time that I felt like I had to dig a little deeper for what I wanted to write about.”

As a lyricist, Thile has relished the new perspective that age has given him. He perpetually evolves his craft to remain interesting, a challenge which he feels continually makes him better.

“A song like ‘Julep’ is a meditation on a happy relationship, the kind of idea of imagining how you want things to ultimately end up,” he said. “The sea change in our lives as we get a little older and a little less reckless — you start writing songs about things that aren’t just yourself, but things that you notice. I love that about getting older; you start looking around and looking less at your own belly button. Less navel-gazing, more just looking around at what’s out there.”

But balancing his busy life is still a work-in-progress.

“I always end up being gone a little bit more than I mean to be,” he said. “And I tend to be a little more fractured than I mean to be, but I feel good and focused this year. That’s another lovely thing about having a family — it’s an instant and urgent focuser. It’s like your North Star: ‘Here’s where I’m at.’ Then where you need to be is a little easier to find sometimes.”

“I have a big musical appetite,” he said. “None of the musicians that I look up to seem to be satisfied with one project. Almost never is one project an appropriate place to put all of your eggs. You’ll end up overwhelming that project and frustrating your bandmates because you can’t shut up about a certain idea or there isn’t enough room in an arrangement for everyone’s ideas. So you’re going to have some energy sitting there burning a hole in your pocket. And you’ve got to have a place to put that.

“Increasingly, I’m looking for things that I can work on from home so I get to see my little boy start to crawl, start to walk,” he continued. “That’s a constant battle — trying to make sure that things are balanced. A project like Punch Brothers is very, very important to me. It’s been the most consistent source of artistic satisfaction for me for a good number of years. Not that I haven’t found equal artistic satisfaction in other projects, but Punch Brothers seems to always be relevant. And the only times that we step away from it have been, not because it ever became less relevant, but because we got so tired. I needed a break. The ideas never stop coming. The Punch Brothers well is never going dry; it’s just that my arms get tired sometimes.”

It’s a comparatively light year for Punch Brothers, as planning for his July 2 takeover of A Prairie Home Companion has taken the wheel and other duo projects, like the aforementioned collaboration with Bela Fleck, are on the horizon.  But Prairie Home, he says, will eventually make it all easier to balance.

“It’s really exciting, the opportunity to put together two hours of live radio every week,” he said. “The template that Garrison [Keillor] created for Prairie Home Companion is one that I am just so excited to work within and to explore from. It feels like this incredible vehicle for exploration, for expansion. All the things that I’m up to — whether that be Punch Brothers or working with Brad Mehldau or Edgar Meyer and Yo Yo Ma, Stuart Duncan… all of those things can happen on Prairie Home Companion in a way that, you know, Nickel Creek can’t happen on a Punch Brothers tour. Brad Mehldau can’t happen in the middle of a Nickel Creek tour.”

“That kind of thing is really, really exciting for me and hopefully for all of the people that I work with,” Thile added. “None of these collaborations that I’ve put so much into and my collaborators have put so much into — none of them are on the chopping block. We’ll keep doing all of these things. The future of Punch Brothers is bright. I can’t imagine that Punch Brothers will ever stop making records together.”

His work with the Punch Brothers has led Thile to create interesting bluegrass cover versions. The band has recorded an instrumental version of Radiohead’s “Kid A,” and performed a live version of Beck’s “Sexx Laws.” For the A.V. Club’s A.V. Undercover the band performed “Reptilia” by The Strokes and a version of “Just What I Needed” by The Cars.

“When the boys and I latch on to a given piece of work to the extent that we feel the need to actually perform it, it’s because we would never write something like that or because we wish that we could write something like that,” Thile said. “We get in there and take the thing apart and put it back together and sometimes it’s like building a model, where you’re going by the picture on the back. Sometimes when you put it back together, the very act of taking it apart and putting it back together has fundamentally changed it in some way.

“If we feel that it has fundamentally changed it in a good way, those are often the covers that you hear us play… Sometimes we’ll play one just because it’s fun, whether that’s The Cars’ ‘Just What I Needed’ or The Strokes’ ‘Reptilia.’ I don’t think that we fundamentally changed either of those songs, so we never recorded them. But with ‘Kid A,’ we felt like the song was different after we got done with it. And it was still good. And different. So we were pretty happy with it.”

Thile has a long history with Birmingham. One of the final shows that Nickel Creek played before disbanding was at Birmingham-Southern College in 2006, and its first upon reforming in 2014 was at the Alabama Theatre. Solo, he has performed with the Alabama Symphony Orchestra, and almost every project that he has created has mapped the Magic City into its tour.

“The very first show after [Nickel Creek’s] split — or not so much a split really — the ‘rest,’ shall we say, was definitely at the Alabama Theatre,” he said. “That was a fun show. We were still ironing out the kinks, but it was fun, and maybe even more fun because of that.”

The timing of those stops is coincidental, he insists, but good.

“There’s certainly a reason that Birmingham is special, but I’d say that those particular instances, there’s certainly an amount of luck there,” he laughed. “It was a happy accident that we got to kick things back up in Birmingham. I love Birmingham. I just got to play a solo show at the Alys Stephens Center there that was one of the highlights of that tour.”

Thile is a Californian, but he’s grown to love Southern hospitality.

“I feel like people always come to listen in Birmingham,” he said. “Regardless of the venue, you know that you’re going to get an engaged and invested crowd. You feel, in Birmingham, what a performer wants to feel, which is that they’re not standing up there by themselves. And during no performance can that be made more clear than during a solo performance. And I definitely didn’t feel alone up there despite the fact that, technically speaking, I was. You feel like you’re playing with the crowd and not for them. And that’s ideal.”

Punch Brothers come to Iron City on Tuesday, May 2. Gabriel Kahane will open. Doors open at 6:30 p.m., while the show is set to begin at 7:30 p.m. Tickets are $28. For more information, visit ironcitybham.com.